I’m thinking about moving and the boyfriend is going to come with me! The thing is, we’re having trouble deciding exactly where. We’ve narrowed it down to California. At first, we said San Diego, then Santa Monica, and now we just can’t decide! Here’s what we’re hoping for:

A large body of water – preferably nearby, and by nearby I mean walking distance with a sandy beach.

Someplace the boyfriend has a chance of getting a job. He’s hoping to do something with video editing and post production but he’d probably settle for any kind of office job (if pressed).

Either big enough to have a downtown, or small enough that we can live in the city center and walk everywhere (what we do now). The boyfriend has a car, but we like to avoid using it if at all possible.

An off-leash dogpark nearby would be cool (I know many areas of California are not exactly dog friendly).

A cool bar where I can find a job.

Any ideas? We’d love any input you might have!

UP totally made me cry. More than once.

Since when did they start making kid’s movies so damn sad?

Here’s the thing.  I love Michael Jackson’s music.  Say what you will about the man.  His music was amazing.  His dancing phenomenal.  Sure, he was crazy.  I don’t know if you can be that talented without being a bit insane (okay, a lot insane.)

Anyway, MJ and I have history.  I remember watching on TV when his video for Black or White came out.  The news did a big story about it, and my entire family gathered in the living room to watch it.  My brother and I spent hours trying to learn all the moves to the dances in his videos (I still know most of the dance from Thriller.)  My dad would watch his videos and say, with a touch of awe, that he was an amazing dancer (if you knew my dad, you’d understand how hilarious and weird this would be coming from him.  The man loves Celine Dion, for heaven’s sake!)

When I was in college, I started working for a certain coffee company.  We used to get these mix CDs to play in the store.  One day Billie Jean came on the stereo.  I was so excited!  (All the free coffee may have contributed to my enthusiasm.)  My coworkers made fun of me.  I told them that from that moment on, every time I thought of it, we would listen to Billie Jean.  (I was the boss, so I could abuse my power however I wanted!)

I think we listened to Billie Jean ten times that night.  Within a week, it had become my thing.  Pop in the CD, hit skip 17 times, and you were there.  Billie Jean is not my lover!  My coworkers thought it was hilarious, if a bit annoying.

To this day, I can’t hear Billie Jean without being reminded of those crazy caffeinated days.

Apparently, I’m not the only one who remembers that, because my phone has been going nonstop since he died.  I’ve gotten text messages, emails, voicemails from people I haven’t heard from in years.  They hear that MJ dies, and they think of me.

That makes me smile.

So I am making a quilt for a friend for a wedding present. It’s almost done! Check out my progress: 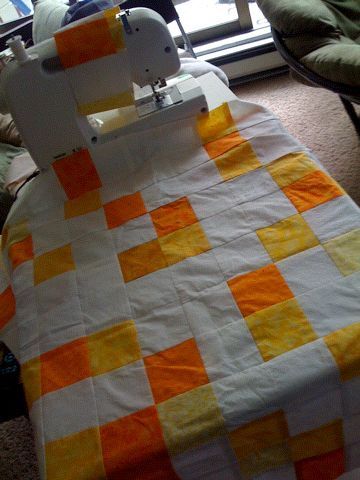 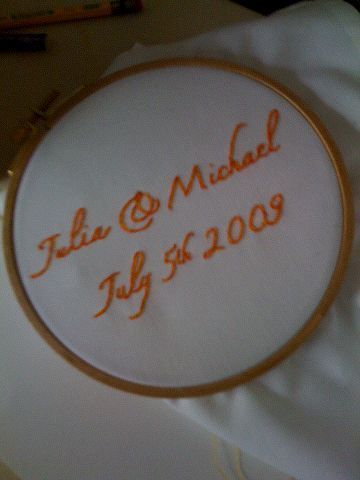 If you are in any way crafty, then you know that with every new skill comes a stash of extra supplies that you just couldn’t resist buying/collecting/saving. So it is with fabric for me. About a year ago I decided to teach myself to sew. Now I find myself with three boxes of unused fabric.

So I’m going to make something out of it. My plan is to make napkins out of the big pieces (goodbye paper towels!), to cut squares for a patchwork quilt out of the rest, and strips from the remnants to braid into a rope rug.

It’s a great project, because it gives me something to do while watching The A Team, but all this cutting is starting to make my hand hurt!

Did you know that all five seasons of The A Team are available to watch on hulu? It’s so awesome, I can hardly stand it!

It was my little brother’s favorite show when we were kids, and I will admit that beyond Mr T, I didn’t remember much about the series. Then I started watching it. It’s completely written for an eight year old boy. A car flips or drives through a wall in every episode (sometimes it flips WHILE driving through a wall!)

Oh man, I can’t believe this show got cancelled! It’s awesomely terrible. Completely formulaic, but that just means that it doesn’t require your undivided attention!

Oh, I love it so much. Apparently, I am an eight year old boy at heart.

Oh, and my Mr T impression is getting pretty good.

Today a baby bird flew into the bar.

Nope, not the beginning of a joke. I was behind the bar making drinks when I heard a ruckus on the patio. I go out to investigate and there is a baby crow cowering under a lady’s chair, with his crow parents in the tree above hollering at him. They were most displeased that he failed so miserably in his attempt to fly. I’m sure they were also upset that there were so many humans near their baby. The woman in the chair looked a bit nervous, so I popped inside and grabbed a towel to try to shoo him off with.

Of course, he sees me coming and bolts…right into the bar!

My coworker sees it and helps me corner him. I pick him up using the towel and carefully carry him outside (much to the amazement of the people on the patio). I put him on the newspaper stand, figuring that he has a shot of flying from something above the ground.

When you have two dogs, clean sheet day is something to celebrate! Woo!

I just wish it lasted longer!

My dad is way eloquent for a burly construction worker, and while he doesn’t know this blog exists, I just have to share the email he sent me yesterday. A little background: he’s in Arizona, I’m in Seattle. Whenever I go home to visit we spend the afternoons standing in the kitchen, talking and eating potato chips from the bag. For some reason, my Pa likes to put the bag in the sink – I always make fun of him for it. Anyway, here it is:

The thing about having a black eye is that it’s right out there for the world to see. I’m lucky mine isn’t worse, and it’s on the side of my face that is partially covered with bangs, so it blends into the shadows a bit.

I tried covering it up with makeup but that made it look even weirder.

It’s quite the topic around the bar though – rumors are flying. Everyone wants to know if I 86’d Sam for being involved.

Here’s the thing. Bar fights happen. You mix testosterone and alcohol, and at some point, sparks are gonna fly. Someone is gonna get punched. My rule is (and always has been) is that I kick out the person who threw the first punch. I don’t care who started it, I don’t care who finished it. I don’t care if it’s a regular customer or a first timer. Throw the first punch in my bar and you’re dead to me. I’ll never serve you again.

But I’m not about to 86 someone who defends himself. I don’t expect people to get punched and not react. That’s just not fair.

And no, I’m not changing that rule just because I got punched this time. I was dumb enough to jump in the middle, I deserve what I got.

So Sam is welcome to come back. Any time. The other guy? Never again. Not on my watch. Not all of my coworkers agree with my decision, but since I’m the one with the black eye, it’s my decision. They’ll live with it. The boss laughed and made me promise to just throw a bucket of ice over a fight next time. Just as effective, less dangerous.

It started out innocently enough. A lie here, a fib there...next thing I knew, lies began pouring out of my mouth on a daily basis. Thing is, I hate lying. I'm not even very good at it! So I've decided to quit. Or try anyway. I'll let you know how it goes.

Error: Twitter did not respond. Please wait a few minutes and refresh this page.